Ad of the Month - Case Study

In advertising, a case study is is one of the most powerful techniques. It is a form of social proof that what you are saying is true. Buyers can put themselves in the shoes of the Case Study 'star' and see how what worked for someone else could work for them. For author Aaron Shapiro, events transpired that created the perfect demonstration of the truth of the message of his book.

Sharipo's book Users Not Customers is about how businesses must adapt to change.That in the immediate future, half of all purchases will either be made online of be influenced by the internet.As an author, the book distribution industry was obviously of keen interest to him, and the passing of the Borders book chain did not go unnoticed. This was a billboard he paid for to promote his book. 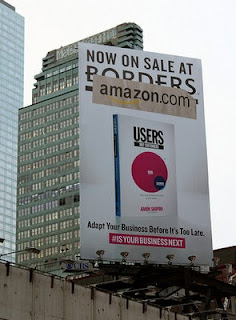 Shapiro said the reasons behind Border's failure were:


Borders was years late to sell books online. When it did, it outsourced the project to one of its chief competitors, Amazon. At the start of 2011, after the company took back control of its Internet operations, online hardcopy sales accounted for less than 3 percent of Borders’ revenue—that’s less than a third of what Barnes & Noble derived from its online hardcopy sales. Then to add insult to injury, it was also late on the e-book craze, creating a me-too e-reader almost three years after Amazon introduced the Kindle.

The beauty of this ad was to cleverly incorporate into its message of the book's availability, the theme of the book, making it stand out from many other competing business books with a compelling call to action.

May Your Business Be - As You Plan It.

Over to You. What do You Think? Post Your Comments Below.

Dr Greg Chapman is the Director of Empower Business Solutions and The Australian Business Coaching Club and is Australia's Leading Advisor on Emerging Businesses and provides Coaching and Consulting advice to Australian Small Business Owners in Marketing & Business Strategies Planning & Systems. He is also the author of The Five Pillars of Guaranteed Business Success and Price: How You Can Charge More Without Losing Sales.