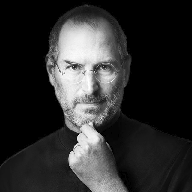 At a recent Australian conference, an associate of Steve Job’s, Guy Kawasaki, gave Job’s top 10 tips for running a business. I particularly like no. 3.

1. Ignore naysayers. A negative or pessimistic attitude doesn’t work in a great technology company. He cited a Western Union internal memo in 1876 which described the telephone as having no value, with too many shortcoming — it wrote off telephony.

2. Don’t listen to your customers. Rather, go with your vision, passion and insight. He said customers in the mid 1980s wanted a bigger, faster and cheaper version of Apple 2, but Apple instead built the Macintosh — a totally unrelated device.

3. Great innovation is on the next curve, not the current one. He cited the example of ice makers, made redundant by the advent of ice factories, but after 30 years they weren’t the companies that developed refrigerators — the next curve. “Most companies start on a curve and die on the same curve because they define their business as what they currently do,” he said.

4. Design counts. Apple was successful because of the way it designed its products, as the millennial generation understood. He said you don’t see pictures of millennials using a big black ugly laptop, except in stock photography.

5. Democratisation is a good thing. Apple is in the business of democratisation, he said. The Apple 1, 2 and MacIntosh changed the game by making technology available to people who didn’t have access previously.

6. Use big graphics and big fonts in slide presentations. Jobs chose 200 points for the main fonts and 90 points after that. When you communicate, less is more. Apple has a 10-20-30 rule for Powerpoint presentations: 10 slides, 20 minutes and a 30-point font.

7. Changing your mind is a sign of intelligence and courage. It does not indicate weakness and cowardice. The 2007 iPhone, for example, was not originally intended to have stand-alone apps, and any app for it was to be a Safari plugin. Jobs changed his mind. The rest is history.

8. Value is different to price. Value includes the total impact of the product, not just its price.

9. Always hire people better than yourself. If you are an A, hire A+. however, in reality, a B manager hires C workers, and a C hires a D. Before you know it, your company is flooded with Z workers.

10. Products need to be both valuable and unique. The Macintosh was successful because it had both. A product that is valuable but not unique will end up in a price battle. Uniqueness without value, meanwhile, was a case of “you are just being stupid.” Dotcom companies were typically neither unique nor valuable, Mr Kawasaki said.


May Your Business be - As You Plan It.